Gyan is a Caledonian chieftainess by birth, a warrior and leader of warriors by training, and she is betrothed to Urien, a son of her clan’s deadliest enemy, by right of Arthur the Pendragon’s conquest of her people. For the sake of peace, Gyan is willing to sacrifice everything...perhaps even her very life, if her foreboding about Urien proves true.


Roman by his father, Brytoni by his mother, and denied hereditary rulership of his mother's clan because of his mixed blood, Arthur has followed his father's path to become Dux Britanniarum, the Pendragon: supreme commander of the northern Brytoni army. The Caledonians, Scots, Saxons, and Angles keep him too busy to dwell upon his loneliness...most of the time.


When Gyan and Arthur meet, each recognize within the other their soul’s mate. The treaty has preserved Gyan’s ancient right to marry any man, providing he is a Brytoni nobleman—but Arthur does not qualify. And the ambitious Urien, Arthur’s greatest political rival, shall not be so easily denied. If Gyan and Arthur cannot prevent Urien from plunging the Caledonians and Brytons back into war, their love will be doomed to remain unfulfilled forever.


But there is an even greater threat looming. The Laird of the Scots wants their land and will kill all who stand in his way. Gyan, Arthur, and Urien must unite to defeat this merciless enemy who threatens everyone they hold dear. 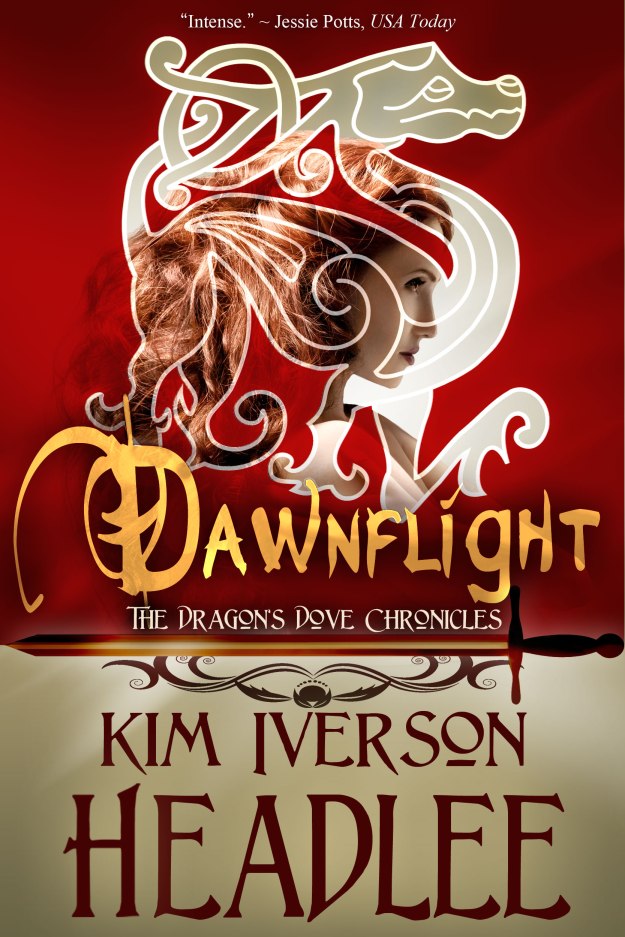 THE COMBATANTS CIRCLED warily in the churned mud of the practice field, blind to the swelling audience and the chilling autumn rain. One, a giant of a figure, was the teacher. The student was neither as tall nor as well muscled but moved with the speed and agility of youth. The mud splattered on both bodies was mute evidence of the length of the session.

“Keep up your intensity!” Ogryvan swiped at his opponent’s midsection. “Always! Lose your battle frenzy, and you’re dead!”


Neither was fighting in true battle frenzy, but the younger warrior understood. Smiling grimly through the rivulets of sweat, the student danced out of reach, whirled, and made a cut at Ogryvan’s thigh. The blunted practice sword could not penetrate the leather leggings but was sure to leave a bruise precisely over the wound he had taken at Abar-Gleann two months before.


Although the swordmaster gritted his teeth against the pain, his opponent sensed satisfaction in the accompanying nod. The reason for the sign of approval was clear: the student had made an excellent choice of moves. Exploitation of the enemy’s weaknesses was a basic tenet of the warrior’s art. Mastery of this principle would serve Ogryvan’s pupil well in the years to come.


“Strive to outthink your foe. Stay one move ahead,” he advised between feints. The clatter adopted a dancelike rhythm as the opposing blade deftly met each thrust. The onlookers shouted their approval.


The youth answered with a powerful counterattack, silent but for the creak of leather and the hollow thunks as sword met shield. The swordmaster staggered backward. His disciple quickened the attack.


And grew careless. The shield sagged. Ogryvan landed a blow to the unguarded left shoulder. Startled, the youth lost footing in the treacherous mud and fell.


The laughter sparked by the mishap, from teacher and audience alike, was not unkind, yet it did not comfort the mud-painted student.


The Chieftainess of Clan Argyll hated to lose.


The reason rankled like that awful brew Cynda called spring tonic: she’d not done her best. She didn’t need her father to tell her that carelessness had caused the loss.


In battle, such a mistake was fatal.


She began to pick herself up, seething, only to be unceremoniously shoved face-first into the mud. Before she could twitch, her father’s foot pinned her down. His sword at the base of her neck chilled her to the core of her being. It was too easy to imagine what might happen next.


Ogryvan whispered, “Pay attention, Gyan. This is my favorite part.” His rumbling voice poised on the brink of a chuckle. “All hear and beware! The Ogre takes no prisoners!”


Had this been actual combat, her head would have become the newest addition to Ogryvan’s private collection. Such was the Caledonach way. Not only was the foe defeated in death, but to the victor went possession of the soul. Well honored was the warrior who boasted the largest array.


Long years of training had hardened Gyan to this aspect of warfare, yet the prospect of someday ending up on display in an enemy’s feast hall was grisly at best.


By the shifting of his foot on her back, she knew her father was posturing for the crowd. They rewarded his performance with gleeful claps and shouts. The official practice session was over, of course. But she wasn’t quite finished.


Her sword hilt nestled in the palm of her outflung hand. She carefully tightened her grip. In a burst of movement, she writhed and scissored with her legs, twisted free, rolled to her feet, and brought the sword up in both hands. Ogryvan toppled into the mud. The resounding wet thud of his landing was chorused by the guffaws of the audience.


She grinned, holding the point of her sword to his throat. “Neither does the Ogre’s daughter!”


No nectar was as sweet as the joy of winning, and winning before an audience of her clansmen tasted even sweeter. One day, she would lead them into battle; events like today’s added another brick onto the foundation of trust. Their heartfelt adoration warmed her like the summer sun.


She sheathed the sword and offered a hand to her father. “Even?” Her voice was huskier than usual from the exertion of the morning.


Ogryvan took the proffered hand to regain his footing. “Even.”


The crowd drifted back to their various duties around the settlement, but one man remained at the edge of the field. She strode toward him, swatting mud from her thighs and chest.


“Like the fen-spirits Cynda used to try to frighten us with.” Her half brother reached for a glob of mud lodged in her braid.


“Ha!” She playfully slapped his hand away. “You know what I mean.”


Per beamed at her. “You did well. I don’t think I could have fooled Father like that. Or held him off for so long.”


She didn’t believe him for an instant. They had sparred with each other often enough to know who was the better swordsman, but she rewarded his flattery with a brilliant smile and a challenge: “Race you to the house!”


She launched herself down the path, bruises forgotten in the autumn mist.

I am Gyanhumara nic Hymar, daughter of Hymar and her consort, Ogryvan. My mother, whose name means “song,” named me her “rarest song,” for I was fated before birth to be the only daughter she would ever bear. Those who do not ken the Caledonach tongue call me by many other names: Vennevria ... Guanhumara ... Ganora … Gwenhwyfar ... Guenevara ... Guinevere. I am none of those women.
I am Gyanhumara.


The banner under which I fight is not my own but my clan's: Na Calamaig h’Argaillanaich, which is called in your tongue the Doves of Argyll. Our storytellers tell us of Clan Argyll’s first exalted heir-bearer, who lived countless generations ago. Argaillean was fierce and strong and true to her name, which means “our tempest.” For her valiant battle against those first despised Ròmanach invaders, she chose the doves, for they are the fastest of birds and the strongest for their size. Argaillean and her army had to be fast and strong to defeat the Ròmanaich. She chose two doves to show unity between her and her consort, between her and her clan, and between her clan and Caledon. The silver on the banner represents the natural coloring of doves, but Argaillean also chose it in defiance of the Ròmanaich, who prize silver for their finest armor and adornments. The midnight blue field against which the Doves of Argyll fly represents the vast eternal realm of the Old Ones… or Heaven, as I have learned to call it.


I also proudly fight under the Scarlet Dragon of Arthur the Pendragon, but I shall defer to him for the explanation of its meaning, if he so chooses to share it with you.

Dawnflight by Kim Iverson Headlee
My rating: 5 of 5 stars

I WAS GIVEN THIS BOOK FOR AN HONEST OPINION

Let me start by saying that I am not a big fan of history.I never liked it in school and i always managed to fail it. But all I can say is WOW. With that being said lets just say the book captivated me from the beginning.Its like you are right there.It weaves religion, status, and nationality in there that you don't actually mind.

This actually puts a woman heroine in it and that is a nice change from the norm. Gyanhumira Hymar a.k.a Gyan is a Caledonion chieftaness by birth. She is also a trained warrior.
She ends up betrothed to Urien Dumarec which is the son of her deadliest enemy. Otherwise there will be a war.

Then Gyan meets Arthur Uther. When he and Gyan met i felt that they have a deep connections. You can tell by the flow of words written. They believe that they are soul mates.
There is a treaty in place that states Gyan can marry any man she wants to as long as he is a Brytoni Nobleman. Here lies the problem. Arthur doesn't fit the bill.

He is the son of a Roman father and his mother is Brytoli . Whatever shall they do? If she doesn't marry Urien they will go to war.If she marries him she will lose out on the love of her life, Arthur.
Now thats all Im going to write about the story. You will have to read it to see what happens. There is so much more to the book. I just gave you the plot so to speak.

Kim Headlee lives on a farm in southwestern Virginia with her family, cats, goats, and assorted wildlife. People & creatures come and go, but the cave and the 250-year-old house ruins -- the latter having been occupied as recently as the mid-20th century -- seem to be sticking around for a while yet.


Kim is a Seattle native (when she used to live in the Metro DC area, she loved telling people she was from "the other Washington") and a direct descendent of 20th-century Russian nobility. Her grandmother was a childhood friend of the doomed Grand Duchess Anastasia, and the romantic yet tragic story of how Lydia escaped Communist Russia with the aid of her American husband will most certainly one day fuel one of Kim's novels. Another novel in the queue will involve her husband's ancestor, the 7th-century proto-Viking king of the Swedish colony in Russia.


For the time being, however, Kim has plenty of work to do in creating her projected 8-book Arthurian series, The Dragon's Dove Chronicles, and other novels under her new imprint, Pendragon Cove Press.
YouTube video interview: http://youtu.be/DV5iKrEIROk

Posted by Theresa Masker at 8:00 AM

I am a wife, a mother, a grandmother and I wear all those titles proudly.
I created this blog because I love to read. And read I do. I like to do reviews also.